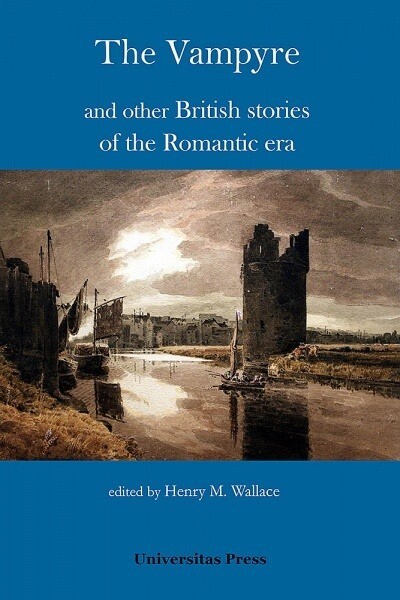 The Vampyre and other British stories of the Romantic era

The Vampyre and other British stories of the Romantic era includes the best short fiction published in Britain during the first decades of the 19th century. The period, associated with the “rise of the tale,” saw every year the arrival of new periodicals dedicated, entirely or partially, to the publication of short stories. Many authors, in all corners of the kingdom, also regularly published their own short-story collections, often in a series of volumes.

The period between 1800 and 1832, from which the stories in this volume have been selected, is especially associated with the great English Romantic poets, as well as with their aesthetic creeds, their predilection for leaps of fantasy, larger-than-life characters and uncanny situations. This is also one of the two important trends in the production of short stories at the time. Authors like Joseph William Polidori, John Galt, William Harrison Ainsworth and Walter Scott (all included here) incorporated Gothic elements into their own take on Romanticism, in which Byronic heroes become vampires and travel to Greece or become immortal and condemned to eternal peregrination; in which characters are buried alive or forced to face the ghost of someone who died centuries before.

Another trend in the British fiction of the early 19th century reflected in these stories is a reaction against exotic locales, remote time periods, and fantastic or outlandish plot elements. This trend, epitomised in the novels by Jane Austen, is manifest in some of the stories included in this volume, by authors such as Maria Edgeworth, Amelia Opie, Mary Russell Mitford, Anna Maria Hall, and Anna Brownell Jameson. They used a tame form of Romanticism or romantic realism, to which they often added social commentary, interwoven with sentimentalism and irony, two strands inherited from 18th-century fiction. Some simply followed two models: “Nature and Miss Austen,” as one of the authors anthologised here (Mitford) puts it.

For the student of the Romantic era in British literature, this is an indispensable instrument, as it allows a synchronic view of a period in which Romanticism coexisted both with earlier traditions and with the realistic and naturalistic trends from which would emerge the great British novels of the mid- and late 19th century.

Universitas Press in an independent academic press that publishes Books that make sense of the world. UP is an indepedent publisher, peer-reviewed, and employee-owned,  established in 2014 in Montreal, Canada.